Microsoft Excel is one the oldest spreadsheet software on the market, and it belongs to the Microsoft Office suite. For a period longer than twenty years, Excel has been the industry-standard spreadsheet solution. For this reason, it is used extensively by businesses of all sizes and individuals.

The spreadsheet software helps users to organize, manage, and add data into spreadsheets by using templates, performing calculations, creating analytical charts, and more. In addition, Excel enables users to get away from walls of numbers and draw more persuasive data conclusions, guiding them to more informed and safe decisions. Some of the best features of Excel are Multi-User Collaboration, Offline Access, and Charting.

As a leading spreadsheet solution, Microsoft Excel is packed with fantastic features that can increase decision-making and data organization. These are Calculators, Charting, Collaboration Tools, Multi-User Collaboration, Offline Access, and Templates.

Microsoft Excel 2021 is the latest version of the solution and can be accessed by subscribing to any Office 365 pricing plan or be purchased as a standalone app. Office 365 is Microsoft's office suite and includes Excel and the rest of Microsoft's Office apps. On top of that, users considering whether to purchase Excel can try the Free Trial or access the free-to-use web browser version.

Excel is a great application for creating editing and sharing sheets. It is a well-known and well-used application.

Microsoft Excel enables users to enter and manage data, such as numbers, text, and graphics, in a grid format. But where Excel differentiates from the competition is that it offers an extreme amount of data processing. For instance, Excel handles up to 17 billion cells, while competitor Google Docs can only manage 5 million cells. And the faster the computer is, the quicker Excel will perform complex calculations because it is fueled solely by the computer's processing power.

Another great feature of Excel is that it has a long list of built-in functions. It has over 450 functions for displaying, managing, and manipulating data. On top of that, the macros allow users to write their own Virtual Basic for Applications (VBA) code. So, they can extend this functionality indefinitely.

As expected, Microsoft Excel has solid data visualization tools. Users can create distinctive presentations of data that accurately and confidently summarize their calculations. With conditional formatting, charts, images, icons, maps, shapes, pivot tables, sparklines, and SmartArt, Excel has every data managing tool users will ever need. So, one of the greatest functions of Excel is that it presents results to others in such an attractive way while it also enables users to modify things on the fly to get the necessary consensus. Consequently, financial and commercial analytics modeling as also forecasting and trending analysis are presented delightfully and beautifully.

Work on Spreadsheets in Real-Time

With Microsoft Excel, users can also co-author spreadsheets, meaning they work together on the same file. They can even see modifications in real-time and chat with other team members within the Excel interface. That takes productivity and communication to a whole new level. That said, only users with a Microsoft 365 subscription can take advantage of the chatting feature. Also, for co-authoring to work, every person must be on the same Excel version, which may not be possible at all times.

However, if something about Excel is daunting, then that is its user interface. Over the years, Microsoft has added so many different features and tools that new Excel users would not know where to start. That said, Microsoft is aware of this and has added an interactive Getting Started tour to help users create their first formula, PivotTable, and chart. What is more, the ribbon menu at the top of the interface is hide-able. On that note, users could opt for using the web-based version of the software exclusively until they master it. Then, they can move to the standard desktop app.

In an effort to help new Excel users, Microsoft's website provides resources for getting the most from Excel. In addition, there is an official Excel community where users can post their queries to a community forum, receiving fast answers and rock-solid advance. The best support feature is that Excel has hundreds of built-in helpful guides about the tool's features and functions. From written material to step-by-step video examples.

There are some slight issues with Excel, however. For example, sometimes files with a lot of data stop responding. That is very frustrating. Also, since Excel updates every few years, Microsoft seems to like changing the location of their functions and tools. For long-time Excel users, that is inconvenient as they have to re-learn how to use the software and get accustomed to the new locations of the Excel tools. And there are limitations on the types of summary layouts available. They seem a bit outdated compared to competitive tools like QlikView and Tableau Software.

To sum it up, Microsoft Excel is a fantastic spreadsheet tool that needs time and effort to master. The fact that it is used almost everywhere in the business world makes it the obvious choice for spreadsheet software. Users might try the free, online-only version of Excel to familiarize themselves with the software's features and platform and then jump on to the desktop version. Lastly, keep in mind that even though there have been many spreadsheet alternatives over the years, they cannot match the power, data managing, and in-depth analytical features of Excel.

Microsoft Excel, developed by Microsoft, was first released in 1993, replacing Lotus 1-2-3 as the industry standard for spreadsheets. As mentioned above, it is part of the Microsoft Office suite of software. The latest version of Excel came out in 2021. Microsoft is located in Redmond, Washington, United States. 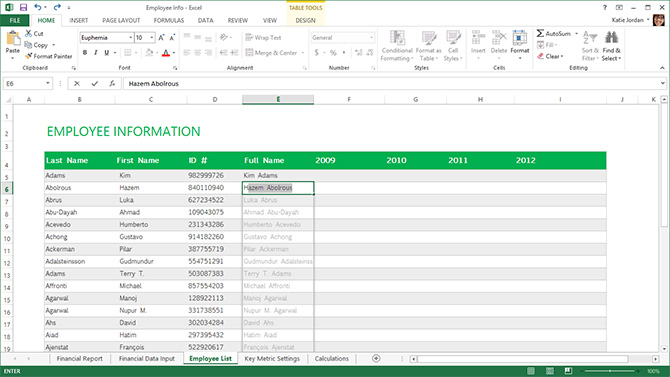